I am delighted to say I have been invited to Highnam Primary School to visit them on Wednesday 5th July, I will be attending an assembly, reading from My Teacher’s a Spy ! and taking questions from the children.

I am hoping this won’t be my last school visit of the current school year but it would be a lovely school to finish at.

Looking forward to meeting everyone at Highnam Primary School,  I really hope they enjoy my visit.

I am really pleased with the preparations for my first appearance at the Hay-on-Wye Book Festival, as previously confirmed I will be appearing at the Fair on the Square on Saturday 27th May from 9am – 12pm. I will be supported by Richard Shackelford from the local branch of the MND Association and his volunteers who will be fund raising on the day.

The MND Association is a charity very close to my family, after losing my brother-in-law Jeff nearly two and a half years ago. I felt very strongly that I would like to support them and by donating a percentage of the sales from every copy of My Teacher’s a Spy ! sold I hope to raise them much needed funds in their fight against Motor Neuron Disease.

MND kills 6 people in the UK every day, every penny counts to help, the MND Association was founded by volunteers in 1979 and they still rely heavily on volunteers today as they make a difference in peoples lives.

I really hope that we have nice weather and a good turnout on the morning as it would be amazing for me to present the MND Charity with a nice donation, books have been sold on Amazon and other websites but I would like to give more to such a great cause. 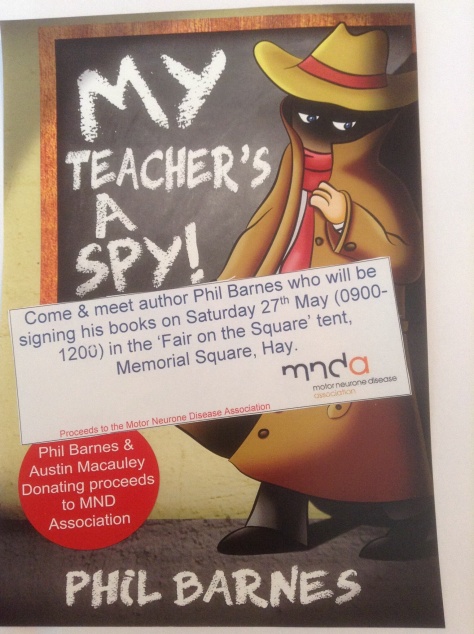